The realistic landscape depicts the Benjamin Avenue Viaduct in Royal Oak, Michigan toward the end of winter.

There are several dilapidated 1930’s viaducts in Royal Oak. They are a point of contention with the residents of the city for various reasons, including questionable structural safety, potholes, trash, and graffiti.

A year or so ago, a friend of mine, artist Carl Oxley III, decided to call attention to the state of disrepair the viaduct near his place was in, and he painted a mural of his signature bunnies on the wall. Well, it turns out graffiti is illegal and someone complained about it to the city. The city responded very swiftly by apprehending Carl and painting over his bunny mural with gray paint. (See my rendition below) Carl learned a thing or two through this process about the city and how it has no control over railroad crossings, but plenty over covering up graffiti.

Anyway, to make a long story short, his story stuck with me. I found myself taking pictures of the viaduct on Benjamin Ave., near my studio, toward the end of winter/early spring. This painting is the result of my curiosity. I love the stains on the concrete, and the texture of the leaves and potholes. I like the subtle differences of the gray squares covering old graffiti and the peeling paint. I like the light, the shadows, and the perspective. Most importantly, I like the challenge it was representing this space accurately. On the sidewalk, I’ve included one of Carl’s bunny yard signs under some leaves, as an homage. He sold those yard signs to people who wanted to support his cause of calling attention to the problem.

Check out this painting in my portfolio. 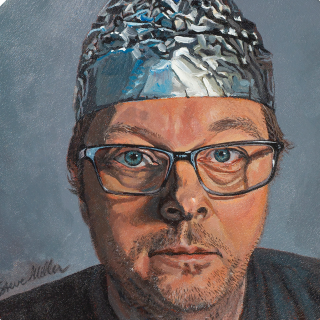